Page 3 Picked to Pieces. If you don't know what 'Page 3' is, then keep it that way and stop reading. You're clearly too innocent for the murky world of 'family newspaper sexism'. Give yourself a pat on the back for avoiding it thus far, then be on your merry way.

For the rest of you damaged goods, check this out - what you're reading right there is a legal document from 2011, stipulating that Double G Communications Ltd (yeah, you read the name right) is no longer allowed to produce and promote its board game, 'Page 3 Idol'. News Group International (NGN) halted the game's release by abandoning the licence agreement. They were accused of stopping production because they believed Page 3 Idol would be a giant flop and would make them no money - a cynical and capitalist decision, but one that would've rid the world of a terrible board game. There's always a silver lining.

None of this really matters, though, because I have yet to tell you what the board game actually did. Are you ready for this? Sitting comfortably? Great. The overall concept of the game was to 'win a (non-topless) Page 3 style makeover and photo shoot'. This is a game made around the time of 2008 - 2010, remember. This is not some 1950s nightmare, although you'd be forgiven for thinking it. Players would move around the board to 'get caught up in the whirl of the glamour lifestyle' and 'perfect those all-important poses to reveal the glamour-kitten within'. You'd build up your portfolio, battle it out on the Catwalk, answer questions to earn money, then the winner would get to wear the sash 'to the amusement of the other players'. I could get offered 1 million quid to play this game and I'd still pour bleach in my eyes not to do it.

Mind you, the company did do some (half-hearted) research, leading to what might be my favourite paragraph in the whole thing: an NGN employee named Mr. Ward approached a specialist 'strategy' games shop called Shire Games while compiling a report, who told him that 'this type of game was "not at all popular" with females', before directing him to BoardGameGeek to find out more. But then again, there's paragraph no. 78, where the woman who worked as a buyer for Argos explained that Page 3 Idol was just as unsuitable as the "Peek-a-Boo" pole dancing set, another product they had previously rejected. This isn't real! This is some kind of satirical sketch show made in hell!

The story's end is not as fantastic as you'd hope. After a lot of bickering and pointed fingers, they still had yet to realise that NOBODY wanted to buy this demon spawn board game. What woman wants to feel just as objectified as her playing piece? It seems that, although further production was stopped, a few already-made copies were sent out into a world too pure to deserve it. How we haven't had the apocalypse yet, I don't know. Fortunately, there seems to absolutely no interest in buying the game, as almost all women have full working use of their brains. Good riddance to Page 3, and nice not knowin' ya Page 3 Idol! 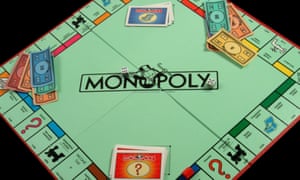 Games @ The Guardian. I know it seems unbelievable that I'm writing this sentence again, but The Guardian newspaper is still talking about board games. At this point, they're talking more about board games than WE talk about board games. And now I'm talking about them talking about board games. It's board game inception. Their latest offering is a list - or rather, a question - about the worst board games of all time. They're opening a can of worms with these opinion pieces, y'know. Clearly this journalist doesn't value his life. His suggestions for 'worst board games' include the usual suspects; 'Monopoly', 'Trivial Pursuit', 'Donald Trump The Game'. He also includes some lesser known titles, like the 'Twin Peaks' board game, 'Poleconomy' and 'Men are from Mars, Women are from Venus'. One game on the list sure to polarize opinions is 'Cards Against Humanity'. Personally, I see it as a method to finding out which of your mates likes dark and twisted humour. Then you can use that knowledge to decide who should make the speeches at your future wedding - or who'd be the best fit if you ever need a murder accomplice. Both scenarios need proper planning!

Forget Netflix & Chill, Play Games! If you're looking for great 2 player games and you missed our blog post from earlier this week, then here it is again! We've got to balance out the gaming atrocities we've featured above, so a hand-picked list of our own recommendations will do the job just nicely.

Game Of The Week - Codenames. In every spy film, there's a party scene. In that party scene, there are hidden spies and villains among the guests, and our cinematic hero must deal with this crisis without ruffling too many pearls and feathers (but in an entertaining, 'action-movie-sequence' kinda way). This, ladies and gentlemen, is Codenames! In this party game for 2-8 players from the man who gave us Galaxy Trucker, Mage Knight and Tash-Kalar, players will split into teams and 2 players will become the spymasters for each team. The cards - one side featuring word clues, one side featuring characters - will be placed in a grid, word side up. The spymasters will have a small grid of their own which shows the hidden sides of each card, as in which team's spies are where. They'll give their team mates clues, hoping to direct them towards their own spies' word cards. Accidentally choosing cards that hide innocent bystanders or the opposing team's spies isn't great, but choose the DEADLY ASSASSIN card? You're out immediately. Spymasters must give skilled and well-crafted clues, while their team mates mustn't be hapless idiots who can't connect the dots. Great fun all round! For an in-depth review, check out Shut Up & Sit Down!

One Year Anniversary! To celebrate hosting a whole year of the Board Game Bar, we're throwing a party at Urban Tap House on October 19th! They grow up so fast, don't they? Come along for raffle tickets, quizzes, prizes and more! 5-10pm, £3 entry.

New Releases Coming Next Week! Mysterium, one of our hottest pre-order products, will be in the store IN THE FLESH!; the trivia game Timeline gets its own Star Wars version; The Game of Thrones LCG will be here BUTBUTBUT as a shiny new Second Edition; Don't Turn Your Back; Pick a Polar Bear; Pick a Seal; Retro Loonacy; and finally, Carcassonne expansions will be BACK IN STOCK! Carcassonne: Inns & Cathedrals and Carcassonne: Traders & Builders, both with a 2015 refresh!