Board Games @ The Beach. If you're the kind of sensible Brit who doesn't spend all of their money on pizza and replica models of small Scandavanian villages (who hasn't been there, right?), then you may be planning an extravagant holiday to somewhere sunny - maybe Mauritius, Monaco, Majorca. You'll be wanting to spend some time lazing about on the beach, but big hefty board games don't always mix well with sand, so what's a guy or gal to do? Lucky for you, some kind of utter genius has realised that while everyone needs a towel... everyone also needs a board game! Meet 'The Gato Game'. These are towels printed with games that feature variants on curling, racing, soccer and sumo wrestling, so while there's no 'towel Ticket to Ride' (yet), these games are in the same vein as things like Pitch Car, Crokinole and Pucket. You can find the game on Kickstarter - see for yourself if you think it's worth the pledge, but for me personally, I WANNA DRY MYSELF WITH A GAME! You can't rub a copy of Catan against yourself and expect it to absorb water (trust me, I've tried), so to have a game you can sleep on, wrap around yourself, use as a picnic blanket AND use as a source of entertainment is pretty darn cool. Finally, something to do at the seaside!

Thank You, Internet. A little while ago, I reminded you guys that the most ridiculous man in the world (Donald Trump) had once put his face to a board game in the Eighties, because there is nothing this tentacle-armed toupee won't do to squeeze money out of everything. Thankfully nobody was that stupid and the game died a tragic, capitalist death, despite his attempt at a reboot several years later. Who told this man that board games are something of a gold mine? Why is he so desperate to crack this market? Maybe he just wanted to print money with his face on it - most crazy rich guys want that. Well, thanks to the good, kind people of the internet, the above video (a commercial for Trump: The Game) was uploaded to Youtube in late 2014. Unfortunately, only 5,443 people have been lucky enough to watch it, which I think is an absolute travesty! So please, watch away! Now imagine you're at a gaming group with your mates and someone pulls THIS out and demands you play it. That was life back in the Eighties. It was all big hair, pointy shoulders and games based on bizarrely popular businessmen. Thank Trump we've moved on.

In A World Nobody Wants To See... We shared this news on social media in the week but it's too odd and unsettling not to show you again, people! You've heard of movies. You've heard of board games. You've heard of movies based on board games that sometimes feature Rihanna for no reason at all. Well, get ready to meet the newest recruits of 'movies that might not make the cut'! From this article on cheatsheet.com, we've learned of a Monopoly movie in the works (of course), a film based on Candy Land and even a stab at taking Hungry Hungry Hippos to the big screen. Risk and Clue (Cluedo) are also being bandied about as potential movies, despite there already being an Eighties film based on the game Clue featuring Tim Curry (and not much else). Look, I get why they're going for the biggest, most popular board games of all time, but come on people! Imagine a black-and-white 'film noir' of Snake Oil, with wide-brimmed hats on sleazy salesman. Or a Wes Anderson flick for Dixit - both the guy and the game are a little bit odd. Want a blockbuster? Try King of New York and Americans will lap that stuff up! Big mutant monsters smashing things in Manhattan? They LOVE IT. Put Clive Owen on a train with some tense background music and BOOM - you've got Ticket to Ride! Look out, Hollywood - we're coming to get you! And your Oscars!

In Other News... A new list has appeared in the Metro, detailing the chances of dying doing different activities, and you'll be pleased to know there's a 1 in a million chance of kicking the bucket when playing a board game! So Godspeed and good luck, gamers. Play something 999,999 times and you probably won't die! 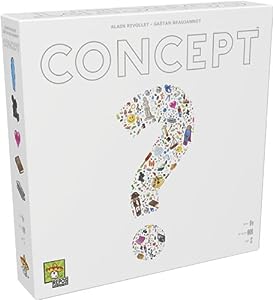 Game Of The Week - Concept. This game's a little like charades for people who've tragically lost all their limbs but still managed to hold on to their pointing finger. You can't speak, but you can give clues, except the clues are... pictures! This 4-12 player game is a winner at parties and family gatherings - the 'creative guessing' element gets a little more scattered and raucous when the drinks are flowing but it's immensely fun to watch the loop-de-loops and circles a person's brain seems to do! One team takes a card with an object, a person, animal etc that they must accurately depict to the other team by using picture clues and universal icons on the board. Need them to guess Leo Dicaprio? Use your main concept marker and your sub-concept cubes to use icons to hint towards man, actor, Titanic, the world's best and most delicious-looking human. Easy! The players with the most points win not only the game, but a better understanding of the inner workings of everyone else's minds. Not much of a prize then! For reviews, check out these with The Dice Tower, Board Game Brawl and BoardtoDeathTV.

Join us this Monday @ the Board Game Bar! Let's face it, Summer's over in Wales. You need things to do as you shelter from the rain - why not make it board games? We're at Urban Tap House every Monday from 5-10pm, £3 entry!

New Releases Available Now - Marvel Dice Masters - Avengers Age of Ultron PLUS the ultimate Collector's Box will be in too; Teen Titans - DC Deck Building; La Granja; and some restocks of Zooloretto and Empire of the Sun!

Concept looks like such a fun game (from watching the Tabletop episode) – hopefully I’ll get chance to play it soon.