Get Cash For Cardboard. In the age of austerity and awfulness, people will do anything to get their hands on a bit of petty cash (as I told the judge). Now, those of us old enough to own retro board games are clinking glasses of champagne and cackling loudly in posh cocktail bars at the news that the games your family told you to throw away could now be worth up to £90,000 - that's the cool sum an early copy of Monopoly sold for recently. You see what you've done, George Osborne? The people of Britain are descending to the gutters and forging their own economy, made entirely of old board games and stolen cheese. If my History GCSE taught me anything, hyperinflation is on the cards. Soon we'll need a whole wheelbarrow of Trivial Pursuits to buy a 'day saver' ticket on a Cardiff bus. We'll need an overlord, of course. We'll call him Flobert Flubabe. I don't know about you, but I'm well in - early copies of Frustration are worth up to £100, which means I've scored myself a whole block of Wensleydale. To see a little more about how much your old games could be worth, check out the original article. Cowabunga! It's TMNT! Next up in the series of 'board games you didn't realise you needed but definitely do', it's Teenage Mutant Ninja Turtle time! While it pays to be wary of licensed/merchandise board games based on things in pop culture (although every Harry Potter game ever made is GOLD), this one is lookin' fab - it'll feature art by TMNT co-creator Kevin Eastman and the designer is Kevin Wilson, whose credits include Arkham Horror, Descent, Civilization and Cosmic Encounter. Plus, two Kevins working together?! That has to be good for something, right? Plus it'll be coming from IDW Games who are responsible for the current and popular run of TMNT comics. All in all, this is a game with a lot of credentials! I was never a TMNT fan (I was more of a Power Rangers kinda gal) but even I'm interested! The game will be a scenario-driven campaign that sees the Turtles battle their deadliest foes - speed and long stretches of sand. It's due for release in 2016 - to find out more, click here! 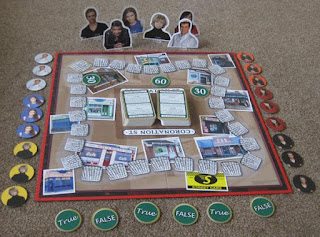 Local Woman Reassured After 'Corrie' Board Game Deemed Okay. A little while back, I was ecstatic to find that a 'Coronation Street' board game had been produced to be launched this summer, thus sorting out this year's Christmas present for my mam and giving her endless hours of enjoyment with Gail, Rita and the Rovers Return crew. Now, finally, after weeks of baited breath, a blog run by Coronation Street fans has officially stated on the record that the game is: 'Good fun'. Not only that, but there's also a jigsaw in the mix! I don't think my mam likes jigsaws. SHE WILL NOW! Aren't Fridays fun?

Join Us At The Board Game Bar! I know I keep harping on about numbers, but last week we saw 80 people shuffle through the doors of Urban Tap House and sit comfortably at tables with a burger in one hand, a pair of dice in the other. That's eighty friggin' people, man! All playin' games and lovin' life! Come join them this Monday at Urban Tap House, 5-10pm, £3 entry!

Game Of The Week - Legendary: A Marvel Deck Building Game. If you like superheroes, supervillains and supercoolboardgames, Marvel Legendary is your perfect match! Players choose between hero decks featuring the likes of Wolverine, Cyclops, and everyone's 'favourite', Spider-Man. Then you must choose a dastardly mastermind villain as their rival, and remember that the villain has a particular scheme up their sleeve... Players will recruit 'hero cards' to strengthen and awesome-ify their deck! Enlisting heroes and upping your fighting ability is of top priority here. Every time a player defeats a villain, they collect the card and will be awarded points at the game's end - but there's a big daddy on campus, too. If you're eligible to fight the mastermind and WIN, you'll collect his attack cards, and collecting them all will bring the game to a dramatic, CGI halt. But be careful! If the mastermind has enough villains escape, or causes your heroes enough damage, then he will emerge into the opening credits as a champion!

New Releases Coming Next Week! Marvel Dice Masters - Avengers Age of Ultron PLUS the ultimate Collector's Box will be in too; Teen Titans - DC Deck Building; La Granja; and some restocks of Zooloretto and Empire of the Sun!