Top 10 Board Games To Play With Your Family!

In honour of the awesome Really Big Board Game Day by NSPCC (@NSPCC), we've drawn up a list of the Top 10 Family Board Games! Gaming with friends and family can be such an important way to have a laugh and raise money for a brilliant cause, so visit the NSPCC website here and scroll down to find out how you can offer a donation!

In this multi-award winning, best-selling board game, players score points by connecting two distant cities via railway and building & completing the longest railways possible. Keep it secret - you don't want someone else thwarting your train tracks! And while drawing extra Destinations is fun, it's choo-choo-and-goodbye if you don't complete them by the end! Fed up of Arriva Trains Wales? Show them how it's done in this Rules of Play best-seller! 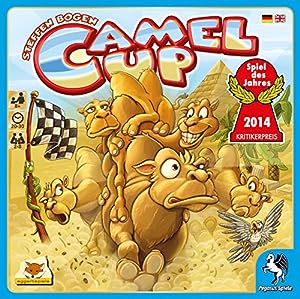 Normally we'd tell you to Gamble Responsibly, but in this game of betting on camels (nature's most unfortunate animal), you can't take anything seriously! Which 'rejected llama' will circle the pyramids first? And can they do it without piling up and carrying each other?! The earlier you place bets, the more you could win, but don't count on too much - these are crazy camels, after all!

Love all the pain of Monopoly but don't want it to last for 17 hours? Machi Koro's for you! This quick, 20 minute game sees players become city mayors, hell-bent on making the biggest and best city. Buy establishments like pizza joints and sushi bars, and collect money when the dice rolls in your favour. It's new age Monopoly with better artwork and less family homicide!

Silly wizards - always getting stuck in mazes! Using magnetic ball-bearings and a hidden maze of wooden pieces, guide your wizard through the labyrinth to collect more tokens than anyone else. Careful! If Mr. Wizard bashes into a wall, it's back to the start for him! In Dixit, players each have a hand of beautifully-drawn cards full of surreal artwork. One player says a line, phrase, sentence or word that symbolises one of their cards, and the other players add in 1 card from their own hand that represents what the first player said. Then it's guessing time! The clever thing about Dixit is that if too many people guess which card was yours, no one gets points. If nobody guesses, no one gets points. You wanna make sure that SOME people guess correctly, and SOME people are left in the dark.

Ahhh! Soggy trainers! In Survive, players control explorers looking for vast riches on an island... an island that begins to sink! You must help your explorers reach the safety of distant islands on boats (if they're lucky) or by swimming (if they're not). Just look out for those sharks, whales and sea serpents - it's lunch time and they're off the diet! Whoever makes it to safety with the most Explorer Points before the volcano explodes is the winner!

Loony Quest takes the biscuit on craziness! Players must try to correctly draw routes, paths and circles for different landscapes featuring bonuses to hit and obstacles to avoid. You win tokens for accurate drawing, and get baaad tokens for going a bit loopy with the pen! Baaad token example: you have to draw the next round... with the token balancing on top of your marker pen! Good luck. It's time to loot then scoot! Players are bandits in the wickedly Wild West, on a mission to rob a whole train and its passengers until one of you ends up the richest! There are gems and moneybags to be stolen, and a briefcase full of dosh you've got your eyes on! Colt Express uses programming for its cards, so actions are chosen ahead of time - you'd best just hope it all goes to plan!

Got someone in the family who throws a tantrum when they lose? (Dad). Try Forbidden Island, a co-operative game where players must try to grab four shiny pieces of treasure before the whole island sinks into a watery abyss! Hop from one area to the next before Waters Rise and it's - *gulp* - time to sleep with the fishes!

Made by independent and local-ish board game designer Matt Tidbury (@cityofzombies), City of Zombies is a certified 'maths tutor' and 'zombie basher' all in one! This co-operative board game cleverly uses maths sums as players roll dice to try and knock out approaching zombies!

If you're looking for more board game recommendations, get in touch on Twitter or Facebook; alternatively, you can email us at games@rulesofplay.co.uk!