All We Want For Christmas Is... As it's December 19th, I estimate that Board Game Santa is currently double checking all the last minute sleigh arrangements, oiling the reindeer, handing out the Christmas bonuses to the elves and, of course, filling up his bags for life with board games! If all goes well and he got the 'Rules of Play Xmas list', then Ian will be waking up on Christmas morning to Deus! It's civilisation-building of course, but with the bonus feature of Gods! You can never have too many almighty deities in a game, we reckon. Huw's been extra good all year (he's only committed three unnecessary murders!) so he's hoping to rip off the wrapping paper and discover Caverna! He loves dwarves more than anything in the world but until he can create a sustainable living space deep within a real life mountain, the game will have to do. And me, I've asked for Tsuro. It's a peaceful tile-placing, path-creating game with little dragon markers, but I think I know a way to make it fun and AGGRESSIVELY DESTROY MY WHOLE FAMILY WHEN WE PLAY IT. Plus it uses really easy strategy! 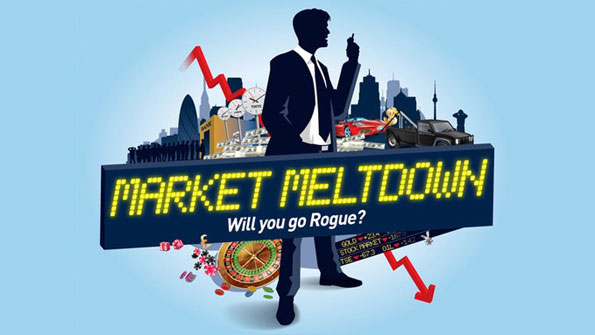 A Banker's Board Game Bonus. Well, this is a first. I've been forced to imagine those 'London city bankers' not just as spindly-fingered, money-rubbing Harry-Potter-lookin' Dementors but as spindly-fingered, money-rubbing Harry-Potter-lookin' Dementors... playing board games with their mates. In an article with The Guardian, they describe a game called Market Meltdown, published by Clarendon Games and with similar mechanics to Monopoly. It's had a surge in popularity recently, with sales more than doubling this year. The game acts as the lead-up to a financial crisis and encourages players to act as 'ruthless traders moving around the board by private jet', borrowing up to a billion pounds to cover losses, and partaking in even more banker-ish activities. The game's popularity is growing exponentially, especially after being endorsed by that millionaire bloke Bob Geldof in The Telegraph. You can't write this stuff, you really can't. One of the more popular locations for game sales is 'Peter Jones', a department store/local corner shop that serves the bankers in London's Kensington and Chelsea - you can't see, but I'm rolling my eyes so hard right now. In fairness, the game looks interesting - unlike Monopoly, it emphasises evil bankers and the fast-paced rate of you going bankrupt in play means it's only 45 minutes until the recession hits and you all bugger off for a turkey sandwich. So go on, do something kind - give a banker this game and give them a Christmas to remember. Or don't. Up to you. I'm neutral! Clearly.

A Christmas List That's Helpful! Ooooh, we love a good game list, we do. Especially when it's a good one - saves us saying the same thing! Check out this one that emphasises the need to 'tear people away from their gadgets' and get them socially interacting. If I'm honest, I often read these lists to see how many of the games we know and stock, and we've lucked out with this one - every single one of them, bar two! Oops. Their suggestions are mainly all party/family games, but that's usually what the Christmas yule-tide period is all about! Even the heavy gamers among us can be roped in to enjoy a game of Snake Oil with the family. So, imagine Christmas as it normally is, potentially with phones, iPads and blank faces all round. Now conjure up a board game into the scene - things just got a whole lot more fun!

We're Hosting A Pandemic Party! On Tuesday January 20th, we'll be hosting a Pandemic Party at The Gate! The aim is to raise money for Doctors Without Borders, a brilliant organisation working on the front lines to treat people affected by Ebola and keep them alive and healthy. We haven't finalised the plans for the event yet, but there are 2 important factors to remember - it's for a brilliant cause, and you'll get to play lots of Pandemic. Yay! Keep an eye out on our Facebook events to see more very soon.

Merry Christmas from Rules of Play!

No new releases coming next week! Christmas has taken over!

New Releases Available Now - Will you be a sorceress, a bard, warrior or the Witcher himself? It's here and ready to be laid out across our tables at long last - The Witcher Adventure Game! Transport ships and cruisers in Impulse; hidden information with Le Fantome De L'Opera; 7 Days of Westerplatte; Imperialism - Road to Domination; Urban Panic; Enclave; D&D DM screen - Hoard of the Dragon Queen; and a whole lot of shufflin' action with Shuffle Monopoly Deal; Shuffle Guess Who; Shuffle Cluedo; Shuffle Trivial Pursuit; Shuffle Boggle Slam; Shuffle Battleship; Shuffle Play-Doh; Shuffle My Little Pony; and Shuffle Transformers - I'm all shuffled out!